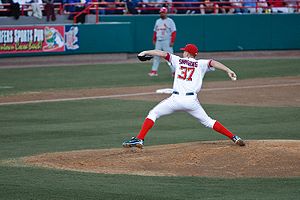 Earlier in the decade, Mark Prior was the big pitching phenom. “He was a star at USC,” was drafted at the top of the draft by the Chicago Cubs, and was in the major leagues in 2003, within a year or so of being drafted. Â His name could have been changed to “Can’t Miss”. Problem was, his arm did not agree with all the pundits. By 2006 he was out of baseball after numerous arm surgeries, unfortunate injuries, and a fateful collision with a guy named Bartman.

It is easy, because it has been so long since he has pitched in a major league game, to forget how exceptional Prior was. He was hailed as a once-in-a-generation pitcher at Southern California, with an unheard-of 17-to-1 strikeout-to-walk ratio and seemingly flawless mechanics. The small-market Minnesota Twins, perhaps scared off by Prior’s price, chose a hometown product, Joe Mauer, with the top pick in the 2001 draft and lavished him with a $5.15 million signing bonus, a record. About six weeks later, the Cubs, who chose Prior second, gave him $10.5 million.

Today, Prior is attempting toÂ make his comeback to the majors by playing in a semi-pro league out in his hometown of San Diego.

I bring all of this up because on Friday, today’s phenom of the year Stephen Strasburg is scheduled to have “Tommy John” surgery on his once golden right arm that has taken MLB by storm this year. And I do mean “taken by storm”. The well deserved hype surrounding Strasburg was off the charts in today’s 24/7 online media world. Like Mark Prior, Strasburg has (or now, had?) all the natural gifts and tools to be special. But with this injury, the hyped up sports world has to again ask “what if” with this newest athlete of the moment. Will he fall on the phenom scrap heap along with David Clyde, Joe Charboneau, and Brien Taylor? Or will he come back and continue (in 2012) on the amazing trajectory he has been on this year?

Destiny is an evil bitch sometimes.