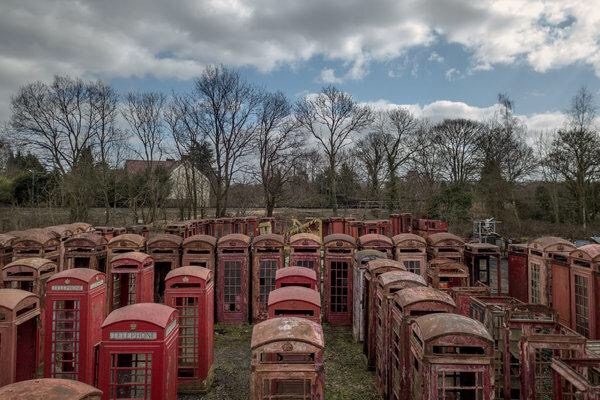 Time and technology has marched on and both have not been kind to many things that were once iconic in Britain. The Monarchy and Royal Family, their once powerful Empire, and sadly, the Red Phonebooth.  Besides nostalgia, why would London need the red Phonebooths when everyone has their own personal phone in their pocket?  Maybe because they just look cool and have such an unique look (ahem…as it has been adopted as an icon of this very site).  And, apparently, the iconic red British Phonebooth is making somewhat of a comback:

Battered first by the march of technology and lately by the elements in junkyards, the iconic phone boxes are now staging something of a comeback. Repurposed in imaginative ways, many have reappeared on city streets and village greens housing tiny cafes, cellphone repair shops or even defibrillator machines.

The original cast-iron boxes with the domed roofs, called Kiosk No. 2 or K2, first appeared in 1926. They were designed by Giles Gilbert Scott, the architect of the Battersea Power Station in London and Liverpool Cathedral. After becoming a staple on many British streets, the booths began disappearing in the 1980s, with the privatization of British Telecom and the rise of the mobile phone consigning most of them to the scrap heap.

About that time, Tony Inglis’s engineering and transport company got the job to remove phone boxes from the streets and auction them off. But he ended up buying hundreds of them himself, with the idea of renovating and selling them.

Today, Mr. Inglis’s operations has taken many of the old, rusted Red Phonebooths and have carefully restored them so that they can be repurposed into various functions such as housing defibrillators in rural hamlets, housing Mobile Phone repair shops, or using the Phonebooths in art installations (to name a few). As a big fan of the iconic Red Phonebooth, I am so happy to see that they are being cared for and brought back to life in various ways!