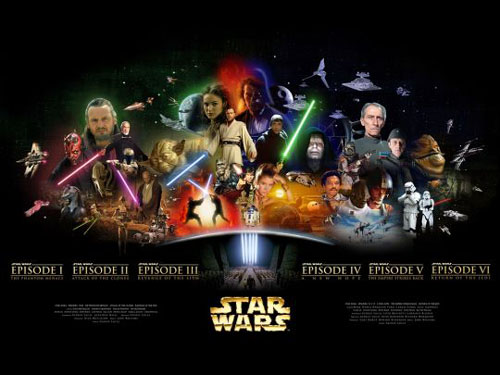 Today was one of those great parenting days, Yes, today, my kids watched Star Wars for the first time.

Earlier this year, I took my son to see the animated Star Wars: The Clone Wars movie (not one of the finer products out of LucasFilms), and ever since, he’s been completely obsessed with the franchise.

After picking up the multi-disc set from the Library, doing a little prep work (“There are no animations. There are real people in these movies.”), we sat down this morning in our post-Thanksgiving sloth to enjoy the show. While tempted to have a 14 hour Star Wars marathon, we held back and just watched the first one.

And here is where the debate begins…which one is really the first one? There has been much animated discourse on which order do you show your kids these movies – theatrical release order (Episodes 4,5,6,1,2,3) or numerical order?

I decided that he should view the series in the theatrical release order since the original three movies are easily the best of the bunch (even though Jedi introduced us to Ewoks) and I felt that seeing them in the theatrical order is how Lucas intended us to experience the story – getting thrown right into the middle of the story via Star Wars: A New Hope (IV).

One day, I may take the time to watch them in numerical order to see if it changes my perspective on the series. That way, at least I’d be able to get Jar Jar Binks out of the way early.