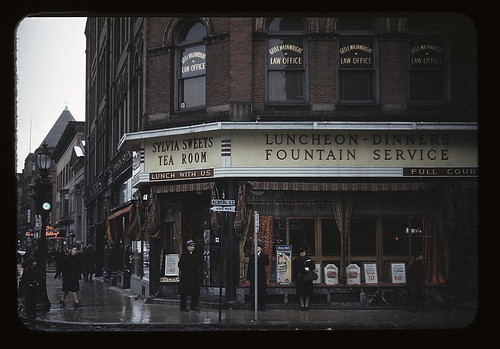 A set of color photos from the 1930s and 1940s on Flickr from the Library of Congress. No, the above photo is not from Instagram or Picplz. :)

Here is a view from “today” of the same corner as above at School and Main Streets in Brockton, MA

Twitter is making all of its content – all 55 million daily tweets – available to the Library of Congress so that all tweets can be part of recorded history.

The library reached out to the company a few months ago about adding Twitter’s content to the national archives, said Matt Raymond, the library’s director of communications. He cited Twitter’s “immense impact on culture and history” like its use as a vital communications tool by political dissidents in Iran and Barack Obama’s turning to Twitter to declare victory in the 2008 election.

So look out folks, twenty years from now, your kids could be researching a paper about life in the first decade of the millenium and stumble upon some of your more interesting posts.