For all of you who were wondering, here is what the back of the Instragram camera looks like. A little geeky humor from Cole Rise over on Dribble.

This has been sitting in my “Drafts” for a month or so and I forgot about it after going on vacation and all. In any case, better late than never. With all the recent issues over the iPhone 4 reception issues has spawned some great humor (the one above being my personal favorite). Here are 16 hilarious spoofs of the Apple iPhone.

This week IFC is running Monty Python: Almost the Truth, The Lawyers Cut, the “definitive” documentary on Monty Python as they celebrate their 40th anniversary this year. If you have not set your DVR, please do so as the first two episodes have been very interesting and entertaining. They interview the members of Monty Python who provide some great perspective on their thoughts and mindsets when they were creating their famous skits. Last nights was great because they went through some of the favorite skits from the Python troupe as well as some famous (and not famous) comedians and writers. Some of the skits that were called out include:

And many, many others. If you are any sort of comedy and Monty Python fan, this is a must watch. 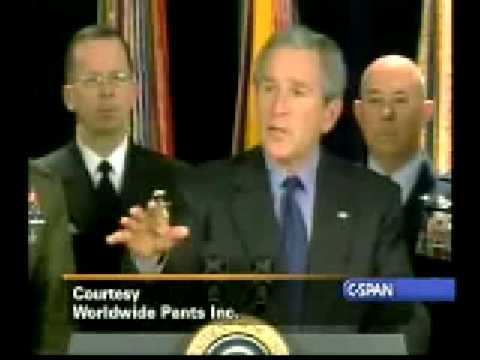 My son is a big fan of Spongebob Squarepants and all his cronies from the Krusty Krab (OK, Daddy watches it here and there too :). So a couple of weeks ago he was watching the “Who Bob, What Pants” episode, in which Spongebob suffers amnesia and somehow finds his way to a town unknown to him called New Kelp City. In his visit to New Kelp City, he is referred to as a “jobless deadbeat”.

So with this context, I take you to my son’s Kindergarten class. His teacher is talking to the class about the poor Economy and specifically discusses how people are losing their jobs and are unemployed. So as any good teacher would do, she reviews the discussion with the class to see who was paying attention. And during this review, she asks the class “So class, what is the word for people who are not working?”. And without missing a beat, my son raises his hand and blurts out “Jobless deadbeats!”.

I would have paid money to have seen his teacher’s face when he said this. Ah, the wonderful world of Spongebob!

PS – I am in no way making light of the economic situation or those who have been impacted. I’ve been on the other side of that sort of decision and it’s no fun.