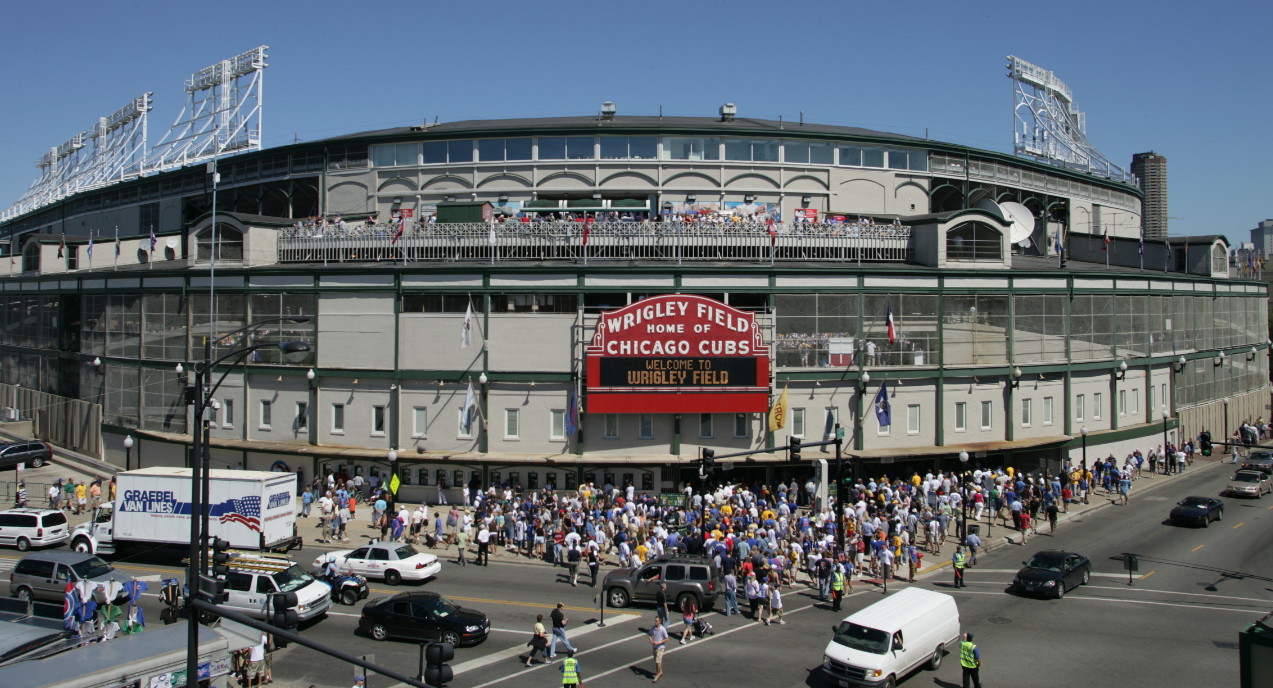 I would run outside to the small, fenced in yard behind our house in Boston and look to the right. I would see a bright glow in the sky and felt the comfort of knowing the Red Sox were home. And then, there would be this faint rumble of a roar – the crowd was happy – and that meant Dewey Evans got a hit, or Jim Ed cranked one over the Green Monster. Growing up a mere 15 minute walk from the baseball shrine that is Fenway Park can skew a baseball fan’s perspective towards a certain baseball team. So while my blind loyalty continues to be for my hometown Red Sox, it has not distorted my perspective on what I think is the best baseball experience you can ever experience – watching a game at Wrigley Field in Chicago. It is as much about the experience in the stadium as it is the atmosphere around the stadium. It is so unique, so Chicago, and so awesome!

Wrigley is tucked away on the North Side of Chicago, on a square block that is bordered by Sheffield, Addison, Clark, and Waveland. Unlike any other baseball stadium that is still standing, Wrigley looks as though it was dropped in the middle of a Chicago residential neighborhood. Fenway is somewhat similar in this regard, as it is awkwardly wedged between Lansdowne Street and Yawkey Way. But Fenway’s immediate neighborhood has, until recently, had a very industrial sort of feel to it. It had it’s charm and made the Fenway experience amazing and unique, but it has never had the coziness of Wrigleyville. But what stadium ever has, other than Wrigley?

With this year’s Cubs team making the World Series for the first time in 71 years – giving them a shot at a World Series title that has eluded their franchise since 1908 – I thought I would share a few experiences from my visits to Wrigley:

Many moons ago, I decided to move to Chicago because I just needed a break from NYC and the East Coast. After finding an apartment on the North Side (Pine Grove Avenue), I packed up the U-Haul and took off for the midwest. I had never been to Wrigley Field at that point in my life but I knew that would change quickly. After finally arriving in Chicago with that loaded U-Haul, I happened to check the Cubs schedule and wouldn’t you know it, they were home that day. So without even bothering to unload the U-Haul that had my few worldly possessions, I went straight to Wrigley Field to catch the Cubs game. As I walked up Clark Avenue, the anticipation of going to Wrigley was high and the crowd of baseball fans started to grow. And then, as I walked past the “Cubby Bear”, the sight of the facade of Wrigley exploded in front of me…there, in the middle of the neighborhood of stores, townhouses, and city streets stood this stadium that looked like the perfect neighbor. I was hoping the pixelated marquee would read “Save Ferris”. There was a large crowd of fans mingling around the outside of the stadium and after soaking in what was in front of my eyes, I found my way to the ticket office. I bought the best ticket I could buy and with giddy excitement, passed through the gate into Wrigley. The main concourse was buzzing with fans – I was soaking it all in – and as I looked to my right, I could see the sun beating down through the stairwells to the stadium. As I ascended those stairwells to find my seat, the inside of the stadium started to come into view and all I remember was the blinding green of the Wrigley grass, the green bleachers in the distance, and the green ivy on the outfield walls. It was so green! I don’t remember who won. I do remember seeing Harry Carey sing “Take Me Out To the Ballgame” during the 7th Inning stretch. I remember stubbornly staying until the game was over because it was such a soothing, comforting baseball experience.

Many months after my first visit to Wrigley, I had some friends from college visit me in Chicago for a weekend. All of us were very big fans of baseball, so inevitably, going to Wrigley was a high priority. We ended up getting some really great tickets on the lower level of the stadium along the 1st base line in short Right Field. They were amazing seats. We had already knocked down a few frosty ones before the game started and as we settled into our seats, we flagged down the nearest beer vendor. And this is why Wrigley is so awesome. The beer vendor that we found looked like he just walked in from a beach in Southern California. He had long hair, a pair of wrap around Oakley sunglasses, and was wearing shorts and a t-shirt. And he was slinging Old Style beer! He loaded us up and departed. The game moved along and we were enjoying our beverages, and like he had a stopwatch personalized to our pace of drinking, our “Surfer Beer Dude” was always there, ready with re-fills at just the right time. It was uncanny and, honestly, pretty impressive. Needless to say, we were four very happy baseball fans by the time the game was over.

It Ain’t Over Until It’s Over

Back in 2008, my wife and I went out to Chicago to visit the city and to also go to the Farnsworth House in suburban Chicago. That Friday when we arrived, we went to catch a Cubs game at Wrigley. The weather was beautiful at the start but it quickly deteriorated and some crazy rain blew through the North Side. When the rain started, the Cubs were losing by some obscene number of runs – 8 or 9 at least. The general sentiment was that the game was a lost cause. After the rain had passed and the game started up again, and my wife and I considered leaving but we decided to stick it out. And so glad that we did! The Cubs came back and won the game with a furious comeback that could only happen at Wrigley when the wind is blowing out.

Wrigley is also an important place in that it is the place where my wife and I went several times when we were first dating. It is a special place and it is a venue that every person – sports fan or not, baseball fan or not – needs to visit to just enjoy the Wrigley experience!

I can’t believe that it has been ten years since this happened.

Which also means that it has been ten years (plus two days) since this happened.

If neither of these cruel things happened, we (most probably) would have had a Cubs – Red Sox World Series in 2003. Remember, that this was before the Red Sox went on to win the World Series in 2004 and 2007. If Twitter existed back then, it would have exploded. The thought of the Cubs and their (then) 95 year World Series drought against the Red Sox and their (then) 85 year World Series drought was a baseball story line that even the most sadistic sports writer could not have conceived would ever actually happen. Would there have been any doubt that the series would have gone seven games? The despair of two tortured fan bases and the thought that one would continue to suffer for who knows how much longer would have played out before our eyes.

There was a nice piece in the Times about how Steve Bartman has basically lived a life of exile within the Chicagoland area. And in many ways, the fate of his beloved Cubs has followed him into a state of exile. In the 10 years since that mid October week in 2003, the two franchises have moved in radically different paths with the Sox winning 2 World Series and are close to making it to a 3rd, while the Cubs have only made it to the post season twice and in both cases, were unceremoniously swept in the League Divisional Series.

The Cubs now have new ownership and they even took Theo Epstein from the Sox in the hopes that his ‘magic’ (which some observant Sox fans may question) would rub off on the Cubs 105 year championship curse. If I were them, I would have Steve Bartman ride into Wrigley Field on a Billy Goat from center field, stop at home plate and shotgun a can of Old Style. If that doesn’t exorcise the demons of Clark and Addison, there is always next year!

Super cool to see the Chicago Cubs playing the Red Sox at Fenway this weekend for the first time in 93 years. If the baseball Gods had not been so cruel back in 2003 – the year of Steve Bartman in Chicago and Aaron (F***ing) Boone in Boston – these two storied (and until this past decade, cursed) franchises would have met in the 2003 World Series. And then the world would have come to an end (until that time, neither team had won a World Series in pretty much forever).