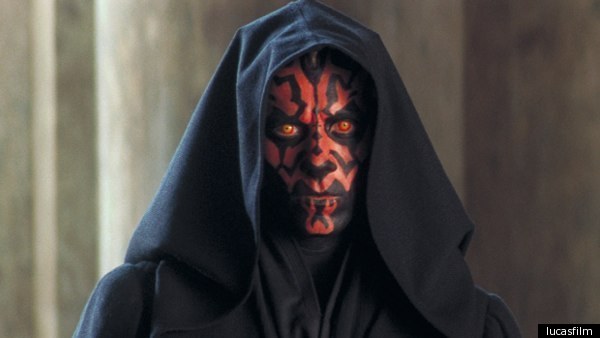 I went with my son to see Star Wars: The Phantom Menace yesterday on the big screen and in 3D. And to no one’s surprise, the movie has not gotten any better with the new effects. Menace is easily the worst of the three “prequels” and wins by a nose over the whole Ewok thing from “Return of the Jedi”.

When movies are re-released with new bells and whistles, its always interesting to recollect about what people’s initial reaction was to the movie, to see if time has healed any wounds or opened new ones. With Menace, neither is the case. This release of Phantom Menace is, daresay, a little worse than the original because you have to watch the movie with the stupid 3D glasses on and cringe at the way a movie franchise that SHOULD have been built for 3D demonstrated no redeeming enhancements from the visual effect that felt like it was hacked into the master copy using iMovie.

As in 1999, the one element of awesomeness in this movie is Darth Maul. From an original review of Phantom Menace in 1999, this snippet from Eric Davis at Movies.com sums his presence up:

Darth Maul was — and still is — the greatest thing about Episode I. He’s scary and menacing, and you’re frightened by him. The dude rocks a duel lightsaber, which totally kicked my world’s ass when I first witnessed the ferociously-paced fight scene between Maul, Obi-Wan and Qui-Gon — perhaps the film’s greatest sequence — and one of the best Star Wars lightsaber battles the series has to offer.

You are begging and pleading for more of him in this movie…maybe some “never before seen” fight sequences that look stunningly awesome in 3D…something, anything to expand his presence in the movie and make it worthy of the epic series it is part of. But alas, we are stuck with Nute Gunray and a Senatorial debate over taxes that apes those in this Galaxy.

I’ll just stick with the original Star Wars and Empire Strikes Back, thank you very much.