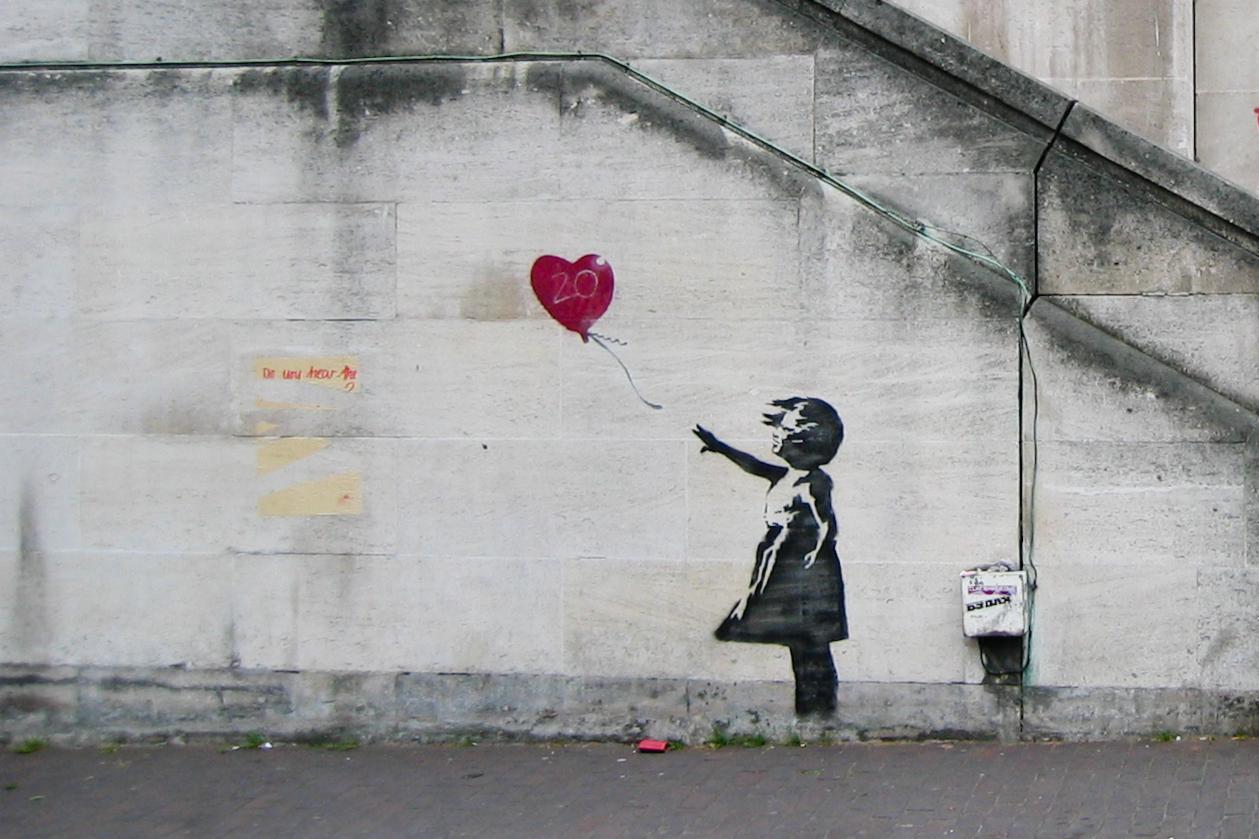 Most people familiar with the artist Banksy. He (or she. I will use ‘he/his’ moving forward) is known for not being known. And he is also known for his distinctive modern art that ‘pops up’ in unique spots all around the world. With the nature of Banksy’s art being so public and displayed in such public spaces, it is really interesting how he (or she) goes about distributing ‘Certificates of Authenticity’ to verify that the person who possess his art acquired it legitimately.

Banksy has established a virtual portal to authenticate whether specific works of his are both genuine and genuinely obtained — and, as the guy trying to get a painting valued admits, he’d visited the site and been told that the painting could not be validated because it was not obtained legally.

Dubbed Pest Control, the service offers an easy-to-use interface to determine a particular work’s validity. Elsewhere on Pest Control’s site, they offer a more extensive explanation of what they do — namely, issue certificates of authenticity.

As for what that means, well — here’s what Pest Control themselves have to say: “The certificate of authenticity (COA) means you can buy, sell or insure a piece of art knowing it’s legitimate and the wheels won’t fall off,” they write. “Pest Control is the only source of COA’s for Banksy. We issue them for paintings, prints, sculptures and other attempts at creativity. We don’t issue them for things like stickers, posters, defaced currency or anything which wasn’t originally intended as a ‘work of art’.”

Pest Control also offers a “Keeping It Real” service, which lets prospective buyers of a work by Banksy confirm that the work is, in fact, legitimate.

This situation came into full relief recently as someone who had ‘acquired’ an Banksy in Brighton UK had brought the piece onto Antiques Roadshow to get it appraised, only to be taken to the woodshed by the host, who chastised the person for not providing the ‘Certificate of Authenticity’.

I am a fan of Banksy’s work because of the way his art communicates a clear, many times withering, message about a topic, movement or circumstance that people need to pay attention to. What brings this home is not only the art itself, but the surface in which the art is painted and/or the environment surrounding the art. One of my favorite pieces that he has done was a mural on the corner of a garage in Port Talbot, Wales, UK. On one wall of the corner, it depicts a child in winter clothes with his arms outstretch and mouth open, seeming to be catching snowflakes with his tongue. If you look on the wall on the other side of the corner, you see that it is a burning garbage bin that is producing the flakes. The message he was sending had to do with the fact that Port Talbot is the home of one of the largest steel mills in the UK that produces immense pollution in and around that area. The accompanying video that he published on his Instagram account really brings the message home. 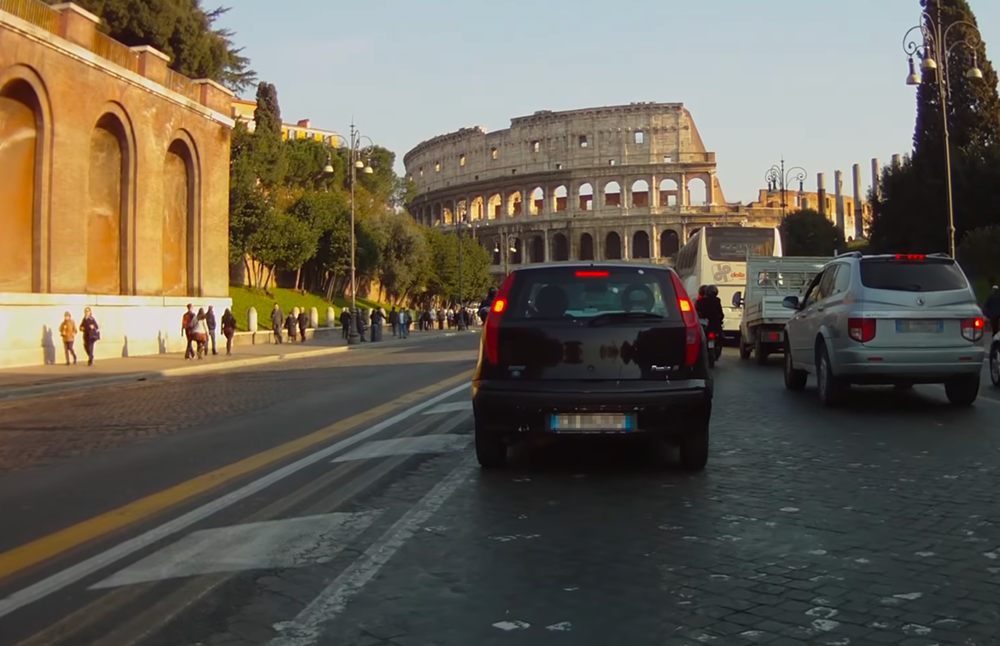 With so many still under some form of quarantine as a result of the COVID-19 pandemic, the need to ‘virtually’ escape and go ‘visit’ other places around the world is obviously in demand.

In late June, a site called Window Swap was making the rounds. It is a site that has the simple premise of being able to share a photo or video of what the world looks like while looking out the window of your home. For example, how about having this view of the Egyptian Pyramids outside of your window. I’d never stop looking away.

Keeping with this trend, another neat site that takes this premise to the next level is Drive & Listen. What this site does is let you watch dashcam video from people driving in and around all sorts of great cities of the world, and ‘overlays’ it with radio broadcasts from that market. So for example, you can watch a video of someone driving around Rome, Italy during any normal day while listening to Italian radio. There is even a Drive & Listen Instagram account as well.

For someone who loves to travel and is kinda frustrated to have to be at home for so long as our country deals with this pandemic, being able to see the nuances of many of the world’s great cities from my desktop computer is a pretty neat trick. 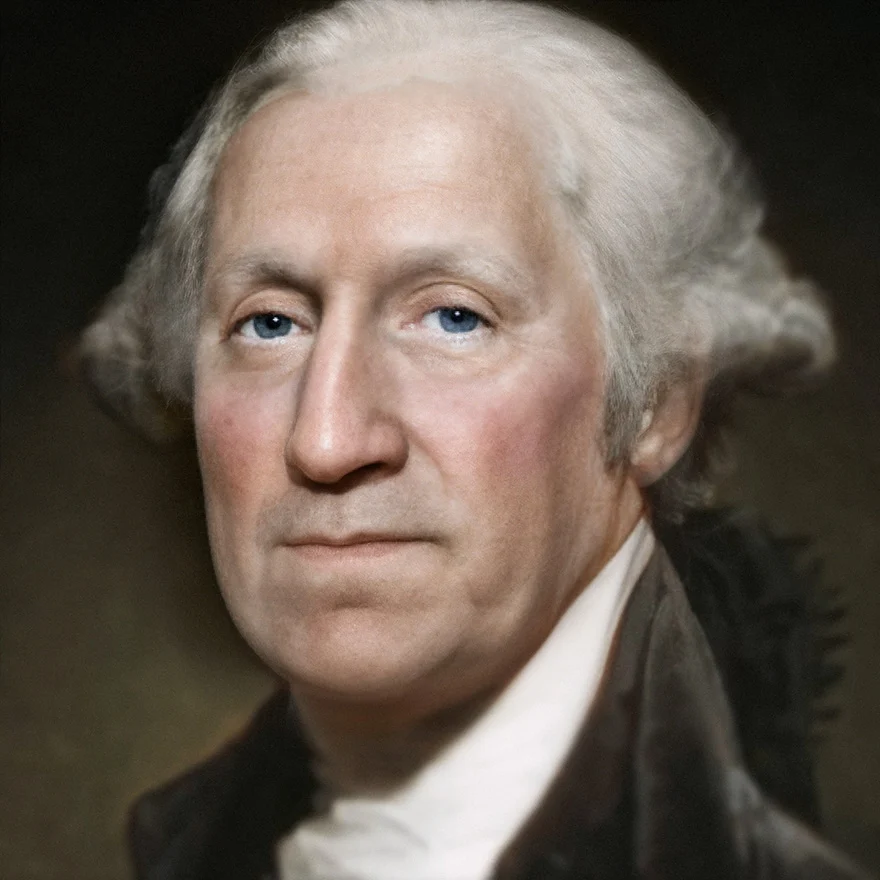 From photographer Bas Uterwijk, some pretty authentic looking A.I. generated images of a few historical figures as if they were to pose for a modern portrait photo. To me, the two below of George Washington and Vincent Van Gogh are pretty stunning versions – especially George Washington’s eyes and the almost tired look of his face. You just feel like he’s going to command the room and not put up with any ‘red coat’ bs. 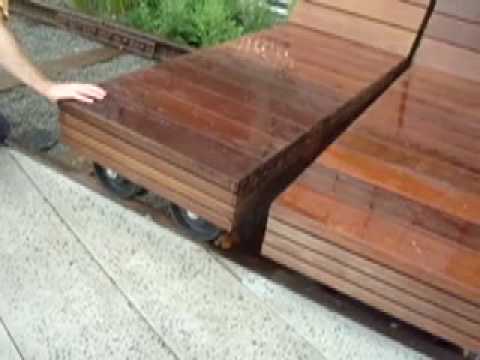 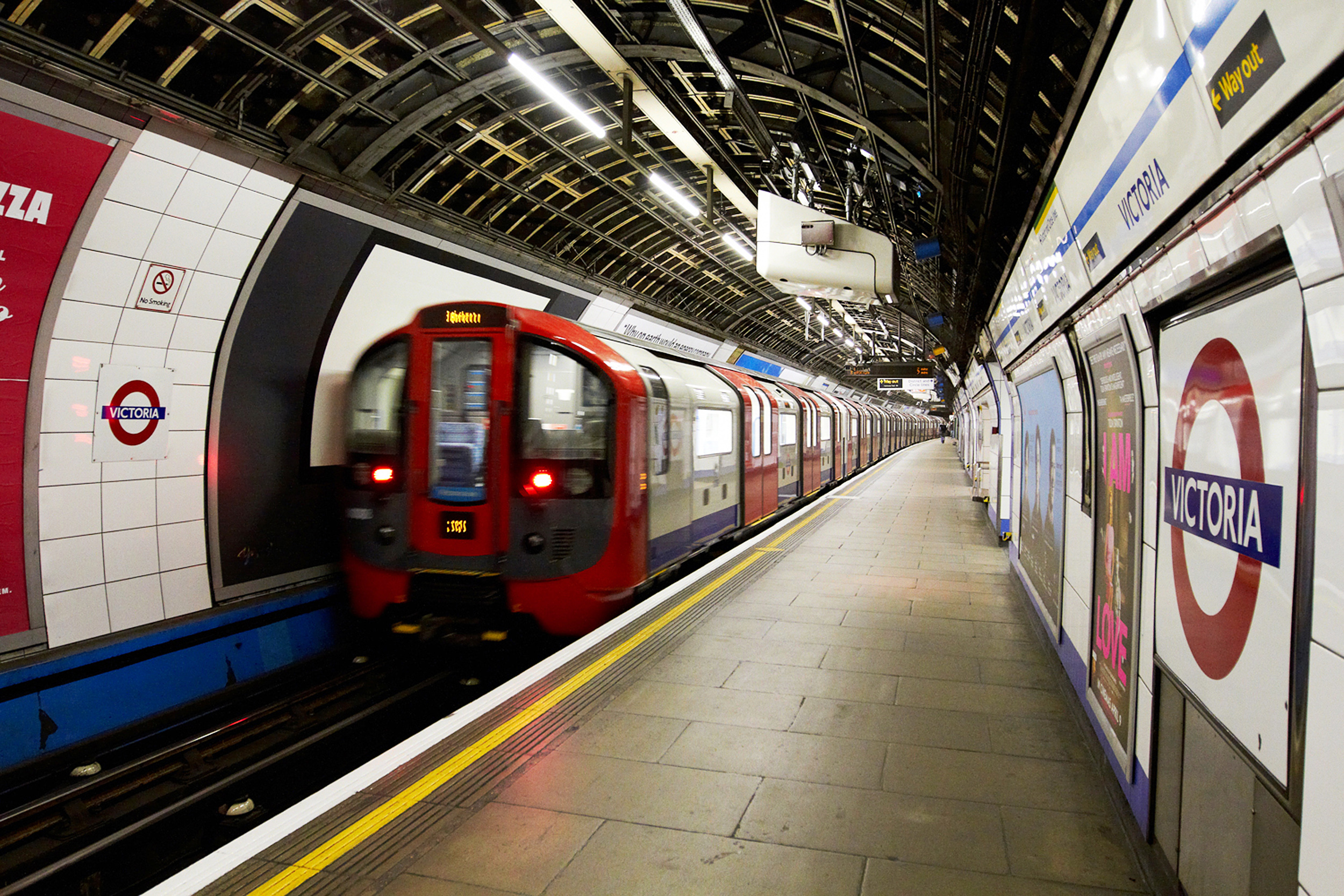 File this under “content you didn’t realize you needed”.

For some reason, I have taken my hobby of creating computer desktop wallpapers to both the next level and to the depths of London town, as I have created desktop wallpapers representing each and every station in the London Underground system. They are done in two “flavors” – one that has the Tube stop logo overlaid on top of a map of the whole system. The other has the Tube stop logo with a ‘subway tile’ background.

Why did I do this? I’m still trying to figure that out. I guess it is just a romanticism with the city of London, and it’s eponymous Tubes system. I love the simplicity of their branding and logo system. I love the complexity of their subway map, underlying the utter chaos that is the street system of London itself. I love the small, unique neighborhoods of London as much as I like the grand spaces like Piccadilly and Hyde Park.

So if you’ve ever spent time in London, and you had/have a Tube stop that you can call your own, head on over to my London Underground page, find your station, and download it and decorate your computer or your iPad or your iPhone. 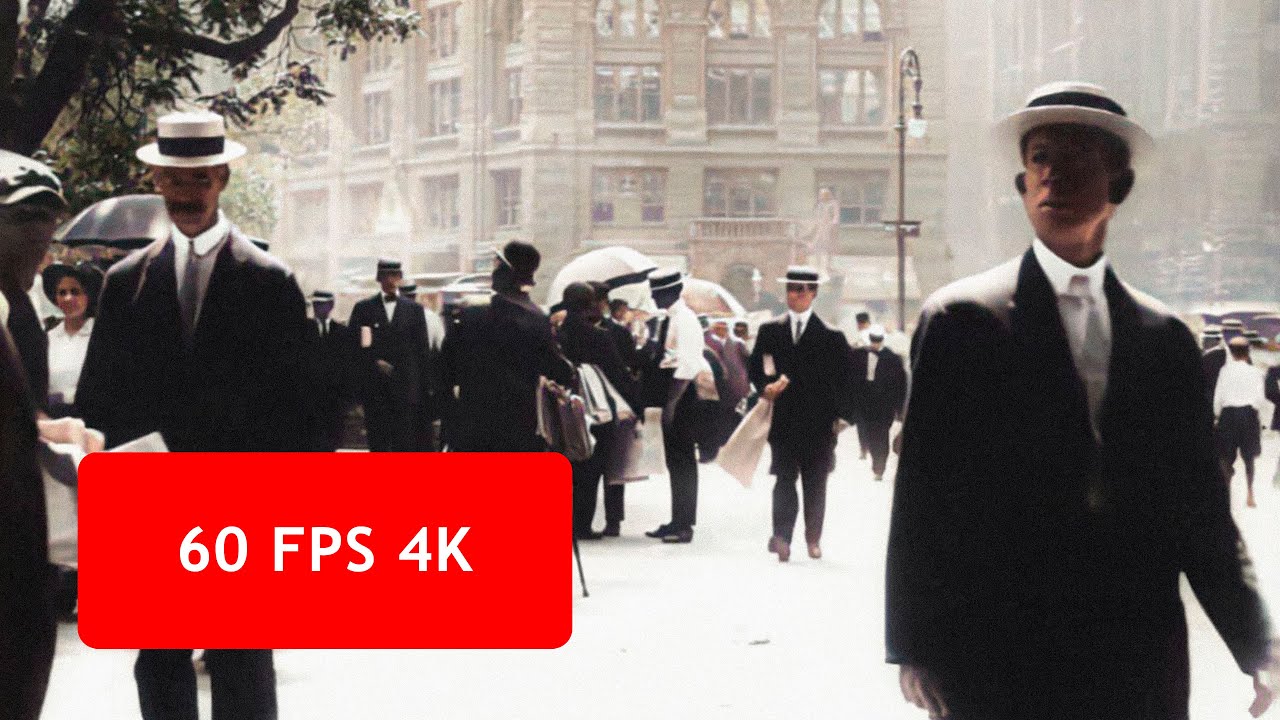 Another amazing restoration of a vintage movie – this time from 1911 – depicting life in and around NYC – using modern computing neural networking capabilities. Many of the scenes in this video could be from today, if not for everyone wearing suits, white straw hats and bowlers. What is most amazing to me is how you can instantly recognize certain street intersections (beyond the obvious Flatiron Building/23rd Street/5th Avenue one). Worth a watch.