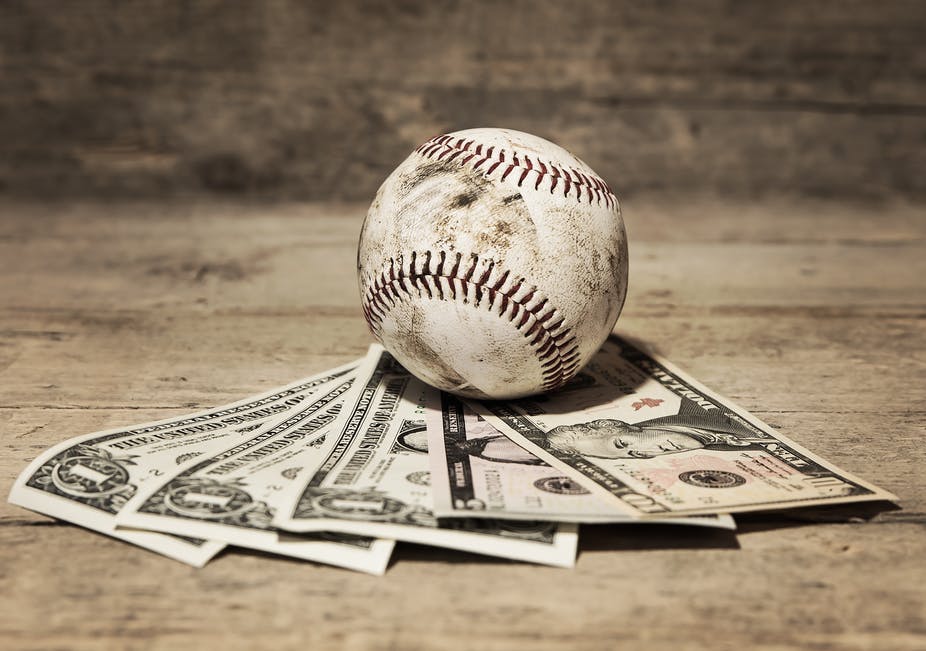 A warm summer day at the ballpark has always held a soft spot in the heart of sports fans in America. Maybe that is a vision from back in the innocent ‘hey days’ of Major League Baseball circa 1955 when tickets were $3 and soda cost a nickel, because when you think about going to the ballpark today, you start to see why attendance is down and baseball’s position at the top of the sports mountain is fading fast. The combination of the excruciatingly long game time (can anyone spend 5 hours watching a Red Sox – Yankees game and then tack on travel time, in this day and age?), coupled with the outrageous (ludacrous maybe? is there another word we could use here?) costs kind of takes any remnants of joy out of going to a ballgame for the average fan.

Ginny Searle at Deadspin makes a pretty compelling – damning even – arguement about the fundamental issues underlying the experience at your typical Major League Baseball stadium. Let’s start with this doozy from the Washington Nationals :

Joining in the American tradition of impeding ease of access to public spaces through feckless security theater, the Nats announced that backpacks will no longer be allowed in the stadium. “The bag policy was created for the safety of all our guests,” explained the team in a statement, ignoring the fact that there is scant evidence that such security measures actually make anyone safer….The Nationals [then] waited more than a month after announcing the ban to reveal that they had partnered with D.C-based startup Binbox to “make 500 medium- and large-sized storage lockers available” in which to store bags that won’t be allowed in the stadium.

So you can’t bring back packs into the stadium but feel free to fork over some money at an hourly rate to store it in a bin outside the stadium for the 5-6 hour, super important Nationals – Rays game. Do you hear that sucking sound because that is the sound of money leaving your pocket. Later on, she does a great job of illustrating what it would now cost a family of four to attend a typical baseball game.

Let’s imagine a family of four trying to go to a baseball game a few years from now. Opening Day, 2021: four tickets cost $132 on average in 2019, so let’s say this family paid $150 per ticket. Kids have little legs, so they will need to park close: add another $50. After struggling to bring up their e-tickets on a single phone at the gate (the team recently phased out all paper tickets), our family will be informed their backpack is a no-go, and they’ll have to spend $20 to rent a Binbox. Finally, after making it into the stadium, it’s time to buy food. Hot dogs and peanuts for four, plus beer and sodas for two each will likely crest $40, and that’s assuming the parents are okay with cans of cheap frat-party beer. (For a pour of the local microbrew, it will be more like $15 each. We’ll say the conscientious parents share one.) Our imagined family had better have their credit card, too, or else they’ll need to load their cash onto a gift card before buying anything in the stadium. Maybe they will be lucky enough to have access to the State Farm-Geico Rewards Club, which the e-ticketing app will remind them of along with directions to the team store. After meandering through the State Farm-Geico Rewards Club so as not to feel like they have missed out on any perks available to them, the parents limit their children to the choice of one $25 stunt food to split. When our family returns to their seats with their Mac and Cheese Pizza Nachos just after missing a home run, they will have already spent a small fortune. If they decide not to attend another game for the rest of the season, it’s unlikely that pace of play will be a determining factor.

From what she itemized above, that’s roughly $800. For one day. At the ballpark. Let’s say it takes 45 minutes each way to get to and from the park. Let’s say the game is 3.5 hours long (average). That’s 5 hours. If they are lucky and it does not go extra innings, or if there are not 5 pitching changes in the riveting 6th inning when the batters take 6 pitches each, or if it is not a shit show getting out of the parking lot along with 50,000 of your best friends. Curious when was the last time parents had a good time taking kids somewhere for 5+ hours that was not named Disneyworld?

I used to *love* baseball. Today, I like baseball. And there is one thing I know for damn sure when I go to a baseball park: I refuse to pay $10 for a plastic cup of 3 day old Bud Light (and $6 for a Nathans Hot Dog), when I can go to a local liquor store and buy a six pack for that same price and still have $$ left over for a hot dog.