Twenty five random but hilarious stories about Ricky Henderson, who played for multiple MLB teams but spent the majority of his career with the Oakland A’s and NY Yankees.

The story went that a few weeks into Henderson’s stint with the Mariners, he walked up to [John] Olerud at the batting cage and asked him why he wore a batting helmet in the field. Olerud explained that he had an aneurysm at nine years old and he wore the helmet for protection. Legend goes that Henderson said, “Yeah, I used to play with a guy that had the same thing.” Legend also goes that Olerud said, “That was me, Rickey.”

Henderson played with Olerud on the Blue Jays and the Mets.

To this day and dating back 25 years, before every game he plays, Henderson stands completely naked in front of a full length locker room mirror and says, “Ricky’s the best” for several minutes.

Some Lego builders took a project to epic proportions and built a scale mini-figure Lego model of the Lord of the Rings Last March of the Ents and theÂ Tower of OrthancÂ . Â How big? Â I’m glad you asked. Â The tower breaks 7 feet tall and the full display is over 8 feet in diamater.

John Berman at ABC News offered up a great “out of office” notice for New England fans reeling from last night’s culmination of the Red Sox epic September collapse:

What is a Red Sox fan to do today? I hope to provide some practical assistance. Accordingly, below you will see my e-mail “out of office” reply. You are welcome to cut and paste it into your own. I find it weeds out some of the annoying correspondence I am getting.
—————
I am in the office, but filtering e-mails with the following warnings:
1) If you are NOT from a certain part of the country (New England), please be aware of the following:
– You are probably NOT as funny as you think you are.
– No, I don’t “have to admit it was an amazing game. I don’t have to admit anything. This is America, and I have amendments on my side.
– There is a good chance I already don’t like you.

2) If you are from the New England area:
– No, I can’t believe it either.
– No, I don’t want to talk about it.
– In fact, let’s never speak of this again. I’m filing it away with that Super Bowl, 1986, and that thing with the glittered indelible body paint.

Duuuude, pour me some coffee. The bowling tonight was way out of hand.

I’ve seen many remakes of this iconic Edward Hopper painting, but this may be one of the finest out there

This past weekend, it was announced that Syracuse University and the University of Pittsburgh will be leaving the Big East conference and joining the ACC.

My Syracuse Orange(men) are now part of the ACC. That just sounds wrong.

I have taken a few days to let this sink in. And in those few days, I have rationalized that from a business, relevance, and survival perspective relative to the current state (fiasco) that is college athletics, I can understand and agree with the move. Yet from a historical and emotional perspective, they are ripping out their athletic heart and soul and as far as I can see, signaling an end to the Big East conference as we know it.

Above and beyond any school in the Big East conference, it could be argued that Syracuse put the conference on the map. No disrespect to Georgetown, Villanova, Pitt, St. John’s and others. But to a high school kid, the spectacle of a sold out Carrier Dome and Brent Musburger saying “You are looking live at the Carrier Dome in Syracuse, NY where today the Syracuse Orangemen will be taking on [insert team here]…” was (and still is) breathtaking. It drove athletes from Southern California to play basketball in the Big East and Syracuse, NY. Think about that for a second.

But this move is not about basketball. Its about football, money, survival, and relevance. The Big East was a basketball conference that tried to become a football conference. In my mind, no matter how hard it tried, it could never get the same respect for football as it did for basketball. In football circles, it was always second tier to the SEC, SWC/Big 12, etc. even though it had a seat at the BCS table. And in the end, that perception/reality was what did the conference in. The Big East’s basketball roots and success did not mean a thing.

The irony about this whole situation is that now the ACC has 5 former Big East schools (Boston College, Virginia Tech, Miami, Syracuse, Pitt) and from what I have heard, two more may be on the way. So as was very accurately Tweeted the other day by Pete Abraham (@peteabe) of the Boston Globe, the new look ACC may very well end up being structured as follows:

And at the end of the day, what will they have really accomplished? The 5 (and maybe 7) former Big East schools will get to play each other again, with a smattering of vapid games against Duke, Clemson and Florida State mixed in for good measure. But we will lose far more – we will lose the beauty of what made the Big East – rivalries with regional schools and programs like Georgetown, Providence, Seton Hall, St. John’s. We will lose the ability for fans/students (oh, remember them?) to take reasonable weekend road trip to visit friends at a rival school and catch the game. We will lose the Big East Tournament in NYC – where alums from all over the Big East have gathered during a week in March for the past 25 years to enjoy a week of non stop, heart pounding, bragging rights basketball.

Yes, I understand the necessity to make this move. But the sports fan in me is not too excited about it.

There has been a lot of press over the past two days about a study regarding Spongebob Squarepants that psychologists Angeline Lillard and Jennifer Peterson from UVA ran. In the study, they examined three groups of twenty 4-year-olds (not to be confused with 24 year olds who watch Spongebob :) one that watched SpongeBob for nine minutes, one that watched Caillou, and one that drew with crayons and they determined that SpongeBob’s “fast-paced” format harmed the children’s memory, attention, and self-regulation.

The present study found that 9 minutes of viewing a popular fast-paced fantastical television show immediately impaired 4-year-olds [executive function], a result about which parents of young children should be aware.

This study is completely bogus for the simple fact that they did not test against the core audience that Spongebob is targeted towards – which is any kid over 6 (or stoned college students). Plus, the burden of knowing what is right and wrong for your kid to watch needs to be decided by the parent, not some study from UVA.

My son loves Spongebob. He takes a Spongebob view of the world – in that he sometimes relates things he sees or experiences in real life to Spongebob’s world. For example, from a post of mine a few years ago:

My son is a big fan of Spongebob Squarepants and all his cronies from the Krusty Krab (OK, Daddy watches it here and there too :). So a couple of weeks ago he was watching the “Who Bob, What Pant” episode, in which Spongebob suffers amnesia and somehow finds his way to a town unknown to him called New Kelp City. In his visit to New Kelp City, he is referred to as a “jobless deadbeat”.

So with this context, I take you to my son’s Kindergarten class. His teacher is talking to the class about the poor Economy and specifically discusses how people are losing their jobs and are unemployed. So as any good teacher would do, she reviews the discussion with the class to see who was paying attention. And during this review, she asks the class “So class, what is the word for people who are not working?” And without missing a beat, my son raises his hand and blurts out “Jobless deadbeats!”.

I would have paid money to have seen his teacher’s face when he said this.

Ah, the wonderful world of Spongebob.

PJ O’Rourke over at the WSJ vents his case against “summer vacation”:

This is nonsense. The little helping hands of farm children were needed during spring planting and fall harvest. (And they must have been more helpful than the little hands of today’s children, or our grandparents would have died of starvation.) Farm kids, if they went to school at all, went in midsummer and midwinter, when nothing much was doing around the barn.

Summer vacation is, in fact, based on horse crap. American urbanization predated the automobile. Horses and what they leave behind them clogged cities that were already insalubrious from coal smoke, industry and notional sewage systems. Come summer, it was vacation time because “if you had any sense, common or olfactory, you vacated.”

I have to say, I love having the kids home from school but wow, it is a lot of work to keep them occupied and not at each other’s throats.

via the Wall St. Journal 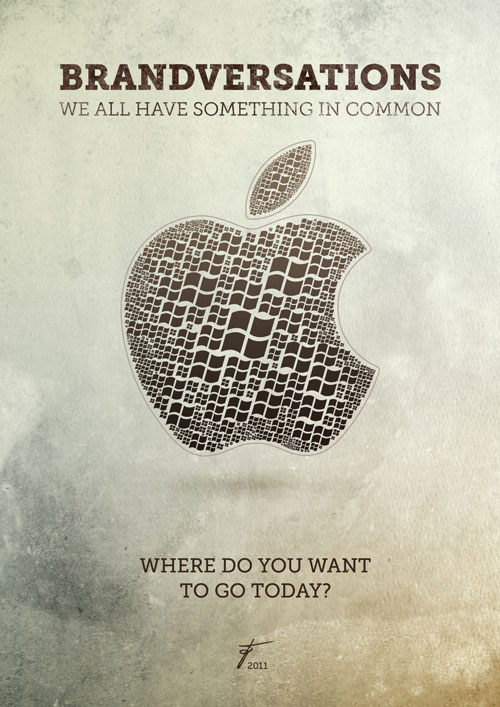 On the Youtube page of the Museum, visitors can leave comments. One person said they should add Yahoo! to the list. Chuckle.