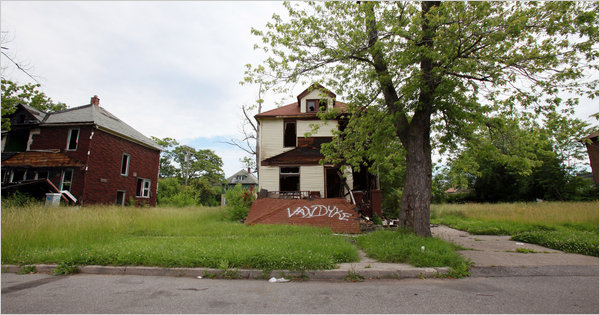 Over the past 10 years, 25% of the population from the city of Detroit have left the city. To put that in perspective, when Hurricane Katrina hit New Orleans, 29% of that city’s population left but that was a one time natural disaster catastrophe. The situation in Detroit is hardly a natural disaster, but more of a social and economic disaster.

Detroit is the only city in the United States where the population has climbed above one million but also fallen below one million, Mr. Beveridge said. And because of the magnitude of Detroit’s population drain, Michigan is the only state to register a net population loss since 2000. Michigan’s population fell by 0.6 percent while the nation’s as a whole grew by 9.7 percent.

The sad thing is that some of the buildings and architecture of the city of Detroit was, at one point during the city’s “heyday”, some of the most glorious you would ever set eyes on. Today, those amazing structures are in complete shambles. Let’s hope that current Detroit Mayor Dave Bing has the will to make some progress here and bring this city even a quarter of the way back to former self.