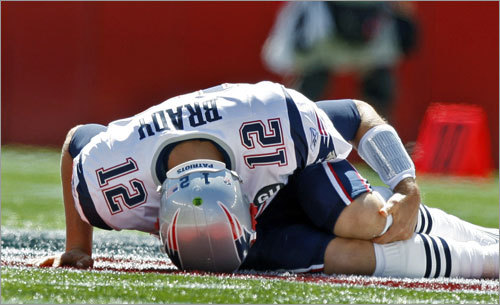 So I’ve been in a state of denial since Week 1 of the NFL season. I’ve just not accepted that Tom Brady got his knee ruined 8 minutes into the 2008-09 NFL season and is out for the year. It took watching Matt Cassell QB the Pats to a victory of the Jets this past weekend to have it fully sink in. When you compound this with the painful loss to the Giants last season, you just realize that you should take full advantage of every opportunity. Maybe Rodney Harrison should have tried just that much harder to get the ball off of David Tyree’s helmet. Or maybe Asante Samuel (who probably does not care since he’s playing in Philly these days) should have tried that much harder to catch that ball that Eli threw. As has been said so many times in so many media outlets, the Pats have quite a season in front of them. It will test Coach Belichick and the rest of the team. Thankfully, we have a pretty easy schedule. I’ll consider making the playoffs a success this year. Anything else is gravy.