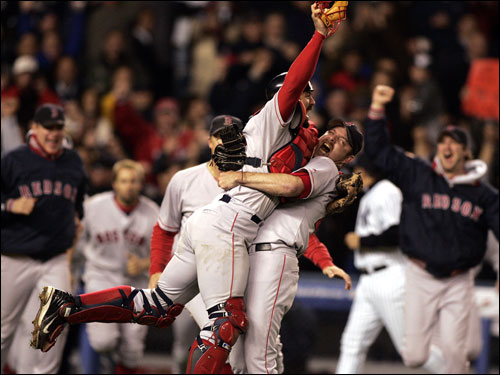 Incredibly, the Red Sox came back from a 3-0 games lead by the Yankees and won the AL Championship Series by winning 4 straignt games against the Yankees. A week ago, I never thought they could do it. After Game 3, I was pretty reseved to the fact that we were again going to lose to the Yankees in the playoffs. Maybe they would win one or two games, but never did I expect 4 in a row. I am still having a difficult time believing they did it and I’m having a hard time expressing into words just how happy and proud I am of the Red Sox. Apparently I’m not the only one struggling for words…even Bob Ryan from the Boston Globe, one who is never at a loss for something to say about Boston sports, was having a form of overjoyed writer’s block, And to achieve such a feat against the Yankees in Yankee Stadium. Its just too good!! It does not get any better!! They will always be the first team in MLB history to blow a 3-0 lead. And the Red Sox will always be the first team to have come back from such a deficit.

I hope they do not get too caught up in the greatness and emotion of this series and lose sight of the real goal – winning the World Series, because there is more baseball to be played against either the Astros or Cardinals. Not winning it all will definitely take something away from their incredible victory. However, winning it all, and going through the NY Yankees and Yankee Stadium to do it, would elevate this team on a plane reached by few teams in the annals of Sports.

As Bob Ryan from the Boston Globe wrote today, “I need a beer.”